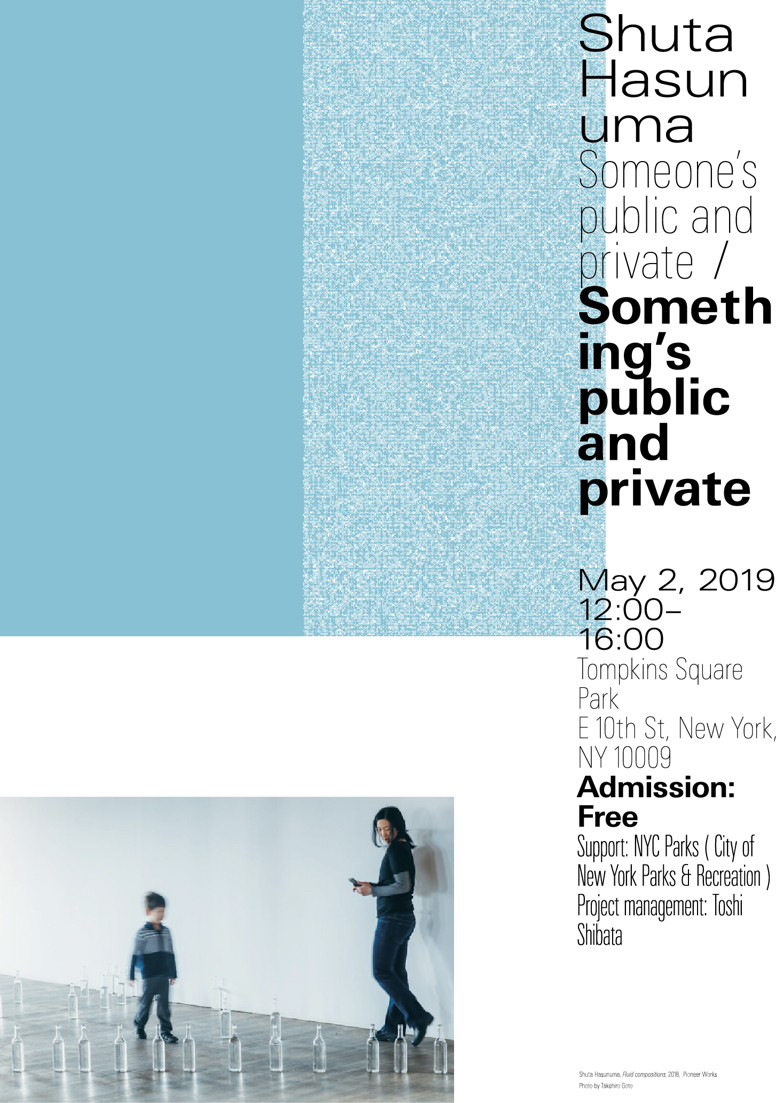 A big, old American elm tree stands symbolically in the Central Plaza of Tompkins Square Park. In 1966, leader of the Hare Krishna Movement Bhaktivedanta Swami Prabhupada held a chanting session to the accompaniment of tambourines and cymbals under the tree, and it is considered to be the venue of the first such session in an outdoor public space outside India. Many cultural events continue to be held at this spot today.

Through “Compositions” at Pioneer Works and “ ~ ing” at Shiseido Gallery in 2018, Hasunuma has given much thought to the relationships of humans with other humans and with non-human entities such as nature and technology. His current project makes it possible to experience the relationship between public and private in a more concrete way in the Central Plaza of this park in New York, a city that can be considered an aggregation of diversity where these types of relationships exist.

As indicated by the words ‘public’ and ‘private’ in the project title, Hasunuma explores the relationships that we as humans are involved in. At the same time, through the works that he presents, he attempts to replace the public aspects or nature of such relationships so that they become private, and to connect the various relationships together. This time around, he chose a public space like a park, rather than the white cube space of an art museum or gallery, because the public space enables a relative perspective when considering this endeavor. It also provides an opportunity to think about the existence of the individual or individuals within society and within groups.

Being a park, there are myriad people, sounds, and relationships. You can find true diversity—people talking with friends, parents and small children playing, people steeped in thought, folks of all ages playing chess on the park’s chess boards, homeless people, political demonstrations, and the small creatures that live hidden in the big city. At the park, public and private are able to coexist side by side.

At this venue, interacting with the artist’s exhibits on the basis of instructions that he has set out, the audience becomes part of the work. Hasunuma has stated that “Music is born out of our everyday lives, originating in the individual, ultimately returning to individual.” This is an opportunity to experience how each individual interrelates with the different elements in the public space of a park, and how, as private elements, they eventually become part of the art itself.